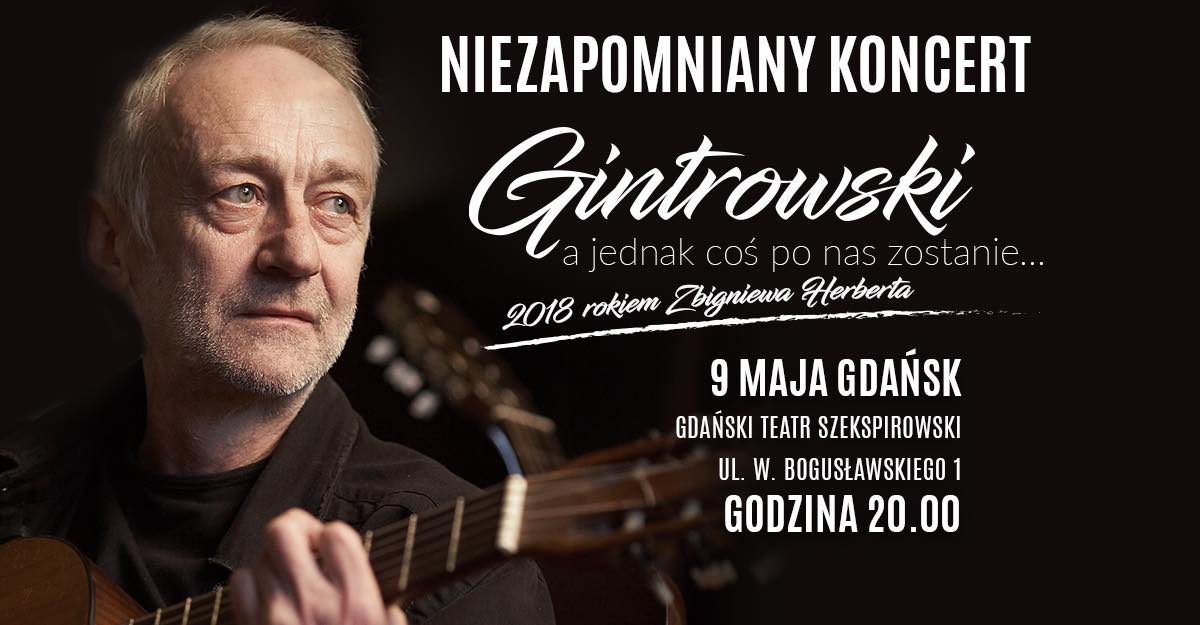 On 9 May during the ‘Gintrowski - we will leave a mark after all’’ concert at the Shakespeare Theater in Gdańsk the audience will listen to the most popular songs of the legendary bard. This extraordinary event is supported by Drutex for the second time already. Great interest of Gintrowski music lovers and over 3 million viewers who watched the TV broadcast confirm the originality and uniqueness of the music event.

„Gintrowski – we will leave a mark after all’’ is a special project that commemorates the legendary ‘Solidarność’ bard, composer, artistic and moral authority, the author of the unforgettable songs of the martial law. In 2018 the project has a special importance since the Polish Parliament has proclaimed the year of Zbigniew Herbert.

Przemysław Gintrowski gave Herberts’ poetry a new life and a new dimension with his music. Herbert’s songs played a highly important part in Gintrowski’s work and they constitute his artistic testament.

„’Gintrowski – we will leave a mark after all” will definitely be one of the most significant cultural events of this kind in Tricity. The special character of the show and the extraordinary stars who contribute to the event prove its high quality. Support for cultural initiatives has been building the company image strategy for years. I believe that this year’s  concert in Gdańsk will strengthen the company position as a partner of unique and original events in the broadly defined culture and music. All music and show lovers are invited to the Shakespeare Theater on 9 May’’ – says Adam Leik, marketing director at Drutex.

During the Gdańsk concert you will listen to i.a.  „Psalm o nożu”, „Bal u Pana Boga”, „Kantyczka z lotu ptaka”, „Posiłek”, „A my nie chcemy uciekać stąd” and „Dokąd nas zaprowadzisz Panie?”, as well as the daring performance of ‘Mury’ executed by the artists of the Grand Theater – National Opera. The audience in Tricity will also have an opportunity to listen to the premiere performance of ‘Kamyk’ - Przemysław Gintrowski song composed for Zbigniew Herbert poem.

The ‘’Gintrowski – we will leave a mark after all” concert is organized by the Przemysław Gintrowski Foundation.

Drutex SA - a partner of the „Beksiński in Warsaw” exhibition
DRUTEX has become the partner of the biggest temporary exhibition of the outstanding contemporary drafter, sculptor, graphic designer and painter, Zdzisława Beksiński.
More